This article is about the letter of the alphabet. For other uses, see J (disambiguation).

J, or j, is the tenth letter in the modern English alphabet and the ISO basic Latin alphabet. Its usual name in English is jay (pronounced ), with a now-uncommon variant jy .[1][2] When used in the International Phonetic Alphabet for the y sound, it may be called yod or jod (pronounced or ).[3]

Childrens book from 1743, showing I and J considered as the same letter

The letter J used to be used as the swash letter I, used for the letter I at the end of Roman numerals when following another I, as in XXIIJ or xxiij instead of XXIII or xxiii for the Roman numeral representing 23. A distinctive usage emerged in Middle High German.[4] Gian Giorgio Trissino (1478–1550) was the first to explicitly distinguish I and J as representing separate sounds, in his Ɛpistola del Trissino de le lettere nuωvamente aggiunte ne la lingua italiana (Trissinos epistle about the letters recently added in the Italian language) of 1524.[5] Originally, I and J were different shapes for the same letter, both equally representing /i/, /iː/, and /j/; however, Romance languages developed new sounds (from former /j/ and /ɡ/) that came to be represented as I and J; therefore, English J, acquired from the French J, has a sound value quite different from /j/ (which represents the initial sound in the English language word yet).

In English, ⟨j⟩ most commonly represents the affricate /dʒ/. In Old English, the phoneme /dʒ/ was represented orthographically with ⟨cg⟩ and ⟨cȝ⟩.[7] Under the influence of Old French, which had a similar phoneme deriving from Latin /j/, English scribes began to use ⟨i⟩ (later ⟨j⟩) to represent word-initial /dʒ/ in Old English (for example, iest and, later jest), while using ⟨dg⟩ elsewhere (for example, hedge).[7] Later, many other uses of ⟨i⟩ (later ⟨j⟩) were added in loanwords from French and other languages (e.g. adjoin, junta). The first English language book to make a clear distinction between ⟨i⟩ and ⟨j⟩ was the King James Bible 1st Revision Cambridge 1629 and an English grammar book published in 1633.[8] In loan words such as raj, ⟨j⟩ may represent /ʒ/. In some of these, including raj, Azerbaijan, Taj Mahal, and Beijing, the regular pronunciation /dʒ/ is actually closer to the native pronunciation, making the use of /ʒ/ an instance of a hyperforeignism.[9] Occasionally, ⟨j⟩ represents the original /j/ sound, as in Hallelujah and fjord (see Yodh for details). In words of Spanish origin, where ⟨j⟩ represents the voiceless velar fricative [x] (such as jalapeño), English speakers usually approximate with the voiceless glottal fricative .

In English, ⟨j⟩ is the fourth least frequently used letter in words, being more frequent only than ⟨z⟩, ⟨q⟩, and ⟨x⟩. It is, however, quite common in proper nouns, especially personal names. 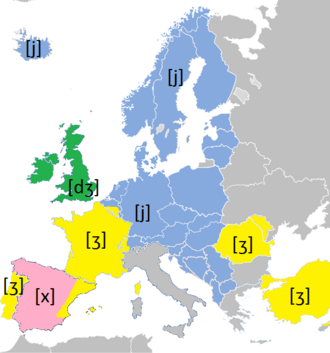 The great majority of Germanic languages, such as German, Dutch, Icelandic, Swedish, Danish and Norwegian, use ⟨j⟩ for the palatal approximant /j/, which is usually represented by the letter ⟨y⟩ in English. Notable exceptions are English, Scots and (to a lesser degree) Luxembourgish. ⟨j⟩ also represents /j/ in Albanian, and those Uralic, Slavic and Baltic languages that use the Latin alphabet, such as Hungarian, Finnish, Estonian, Polish, Czech, Serbo-Croatian, Slovak, Latvian and Lithuanian. Some related languages, such as Serbo-Croatian and Macedonian, also adopted ⟨j⟩ into the Cyrillic alphabet for the same purpose. Because of this standard, the lower case letter was chosen to be used in the IPA as the phonetic symbol for the sound.

In the Romance languages, ⟨j⟩ has generally developed from its original palatal approximant value in Latin to some kind of fricative. In French, Portuguese, Catalan, and Romanian it has been fronted to the postalveolar fricative /ʒ/ (like ⟨s⟩ in English measure). In Spanish, by contrast, it has been both devoiced and backed from an earlier /ʝ/ to a present-day /x/ ~ /h/,[10] with the actual phonetic realization depending on the speakers dialect.

Generally, ⟨j⟩ not commonly present in modern standard Italian spelling. Only proper nouns (such as Jesi and Letojanni), Latin words (Juventus), or those borrowed from foreign languages have ⟨j⟩. The proper nouns and Latin words are pronounced as the palatal approximant /j/, while words borrowed from foreign languages tend to follow that languages pronunciation of ⟨j⟩. Until the 19th century, ⟨j⟩ was used instead of ⟨i⟩ in diphthongs, as a replacement for final -ii, and in vowel groups (as in Savoja); this rule was quite strict in official writing. ⟨j⟩ is also used to render /j/ in dialectal spelling, e.g. Romanesco dialect ⟨ajo⟩ [ajo] (garlic; cf. Italian aglio [aʎo]). The Italian novelist Luigi Pirandello used ⟨j⟩ in vowel groups in his works written in Italian; he also wrote in his native Sicilian language, which still uses the letter ⟨j⟩ to represent /j/ (and sometimes also [dʒ] or [gj], depending on its environment).[11] The Maltese language is a Semitic language, not a Romance language; but has been deeply influenced by them (especially Sicilian) and it uses ⟨j⟩ for the sound /j/ (cognate of the Semitic yod).

In Basque, the diaphoneme represented by ⟨j⟩ has a variety of realizations according to the regional dialect: [j, ʝ, ɟ, ʒ, ʃ, x] (the last one is typical of Gipuzkoa).

Among non-European languages that have adopted the Latin script, ⟨j⟩ stands for /ʒ/ in Turkish and Azerbaijani, for /ʐ/ in Tatar. ⟨j⟩ stands for /dʒ/ in Indonesian, Somali, Malay, Igbo, Shona, Oromo, Turkmen, and Zulu. It represents a voiced palatal plosive /ɟ/ in Konkani, Yoruba, and Swahili. In Kiowa, ⟨j⟩ stands for a voiceless alveolar plosive, /t/.

⟨j⟩ stands for /dʒ/ in the romanization systems of most of the Languages of India such as Hindi and Telugu and stands for /dʑ/ in the Romanization of Japanese and Korean.

The Royal Thai General System of Transcription does not use the letter ⟨j⟩, although it is used in some proper names and non-standard transcriptions to represent either จ [tɕ] or ช [tɕʰ] (the latter following Pali/Sanskrit root equivalents).

In the Qaniujaaqpait spelling of the Inuktitut language, ⟨j⟩ is used to transcribe /j/.

1 Also for encodings based on ASCII, including the DOS, Windows, ISO-8859 and Macintosh families of encodings.

Unicode also has a dotless variant, ȷ (U+0237). It is primarily used in Landsmålsalfabet and in mathematics. It is not intended to be used with diacritics since the normal j is softdotted in Unicode (that is, the dot is removed if a diacritic is to be placed above; Unicode further states that, for example i+ ¨ ≠ ı+¨ and the same holds true for j and ȷ).[15]

In Unicode, a duplicate of J for use as a special phonetic character in historical Greek linguistics is encoded in the Greek script block as ϳ (Unicode U+03F3). It is used to denote the palatal glide /j/ in the context of Greek script. It is called Yot in the Unicode standard, after the German name of the letter J.[16][17] An uppercase version of this letter was added to the Unicode Standard at U+037F with the release of version 7.0 in June 2014.[18][19]

In the Wingdings font by Microsoft, the letter J is rendered as a smiley face (this is distinct from the Unicode code point U+263A, which renders as ☺︎). In Microsoft applications, :) is automatically replaced by a smiley rendered in a specific font face when composing rich text documents or HTML email. This autocorrection feature can be switched off or changed to a Unicode smiley.[20] [21]