1) This is an insightful article in the Financial Times: Tiger Cubs: How Julian Robertson built a hedge fund dynasty.

Based on meeting Robertson on a number of occasions (he was even kind enough to speak at one of my Value Investing Congresses long ago) and knowing many of the Tiger cubs, this article rings true. Excerpt:

“No shop in the history of investment management has produced more phenomenal people,” said Dixon Boardman, chief executive of Optima Asset Management, who worked with Robertson at broker Kidder, Peabody & Co before Robertson set up Tiger in 1980.

Tiger’s influence is scattered across global finance. Close to 200 hedge fund firms can trace their origins back to Tiger Management, according to investor LCH Investments. They are linked either through time at the original hedge fund, the 50 or so groups where Robertson provided seed capital to launch their businesses or as so-called “grandcubs” that broke away from alumni firms. Only George Soros’ hedge fund Soros Fund Management comes close to having incubated so many key players in the industry, according to LCH…

“Julian Robertson’s ability to recruit young analysts, train them in equity investing and allow them to flourish as spin-off firms is unique, given the success that many of the Tiger Cubs have had,” Pierre-Henri Flamand, senior investment adviser to Man GLG, part of listed investment manager Man Group. “That will be his legacy.”

I would love to learn more about this test:

A key player in that process was Dr. Aaron Stern, a psychoanalyst who worked in various roles at the firm including chief operating officer for 30 years. Dr. Stern, who died in April aged 96, was a leading expert in narcissistic personality disorder and wrote the influential 1979 book Me: The Narcissistic American.

“Aaron was a great, great man,” said Optima’s Boardman. “It would be too much to say he was responsible for Julian’s success… But he was the one who sorted out who should be there, who should be at the king’s table.”

Robertson used Dr. Stern in the early 1990s to develop a systematic way of replicating Tiger Management’s early success hiring talented young analysts, which had until then relied on Robertson’s gut instinct. The test for applicants consisted of about 450 questions and lasted over three hours.

“He was very important because he really did perfect… this recruitment technique that we used,” said Robertson.

Questions could include the Rorschach test, developed in 1921 for spotting mental imbalances. Stern also designed the exams so applicants could not “game” them by giving answers they thought Tiger wanted.

“Some of the questions were open-ended,” said one former portfolio manager who took the test. “It was along the lines of: Is it more important to get on well with your team or to challenge them? Would you prefer to be intellectually right but lose money or to be intellectually wrong but save the trade?”

The aim was to identify how applicants thought, took risks or worked in teams. The process was a product of its age; recruits were overwhelmingly male and there are no notable “tigresses” in what remains to this day a heavily male industry. Still, the thought process stood out as quirky. Rather than just trying to find the most intelligent people, Tiger looked for people who were highly competitive and had excelled in fields such as sport.

“Once somebody had a certain amount of IQ, it really wasn’t as relevant as you think to their success”, said Alex Robertson, Julian’s son and president of Tiger Management today.

2) Berkshire Hathaway (BRK-B) filed its latest 13D on Monday, which showed CEO Warren Buffett’s holdings of the stock and his ownership percentage. Doing a bit of back-of-the-envelope math, this Twitter user estimates that the company bought back another $6.6 billion in stock in the second quarter – a healthy number: 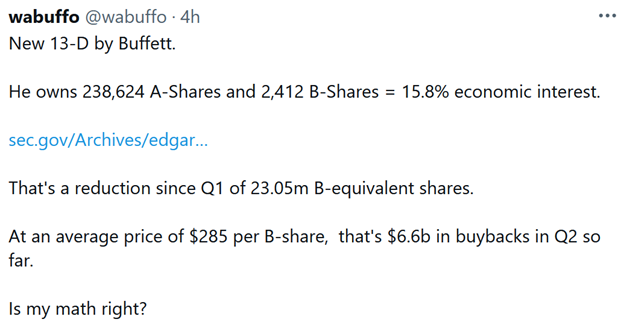 3) Speaking of Buffett, one of the reasons I’ve long been one of his biggest fans is that he embodies so many traits that I admire and seek to emulate, such as wisdom, humility, generosity, and gratitude.

You can see all of these in this letter he released yesterday: Comments by Warren E. Buffett in Conjunction With His Annual Contribution of Berkshire Hathaway Shares to Five Foundations. Excerpt:

Today is a milestone for me. In 2006, I pledged to distribute all of my Berkshire Hathaway shares – more than 99% of my net worth – to philanthropy. With today’s $4.1 billion distribution, I’m halfway there.

In June of 2006, I owned 474,998 “A” shares. Now, I own 238,624 shares, worth about $100 billion. All remain destined for philanthropy. Having reached the midway point of my plan, I would like to supply a bit of history and suggest a few subjects for further thought by philanthropists, government and the public.

The easiest deed in the world is to give away money that will never be of any real use to you or your family. The giving is painless and may well lead to a better life for both you and your children.

The second step of disbursing huge sums is more challenging, particularly when the goal is to focus on crucial problems that have long been difficult to conquer or even dent. The specter of weapons of mass destruction remains undiminished. Can private philanthropy temper the threats to society that cyber is serving up?

My own case illustrates the first, more pleasant, point. Over many decades I have accumulated an almost incomprehensible sum simply by doing what I love to do. I’ve made no sacrifice nor has my family. Compound interest, a long runway, wonderful associates and our incredible country have simply worked their magic. Society has a use for my money; I don’t.

Please understand that these remarks are no swan song; I continue at my enjoyable job, doing what I like, aided by associates I like and working to deploy the savings of people who have long trusted me. I still relish being on the field and carrying the ball. But I’m clearly playing in a game that, for me, has moved past the fourth quarter into overtime.

4) I’ve written many times about what a total scam bank overdraft fees are – bilking the people who can least afford it – so this is good to see: Banks Slowly Offer Alternatives to Overdraft Fees, a Bane of Struggling Spenders. Excerpt:

Overdraft fees, initially marketed as a convenience, have proliferated in the past quarter-century. Rather than bouncing a check or other payment, these programs reassure customers that a bill won’t go unpaid or an emergency purchase won’t be denied – even though they can turn a $3 coffee into a $38 extravagance.

Since then, overdraft protections have become known as an aggressive way to siphon fees from consumers. Although customers must opt in to overdraft protections for debit or A.T.M. withdrawals, banks don’t need their permission to charge fees for online payments or checks instead of letting them bounce.

All told, overdraft fees are worth billions of dollars to banks each year. The charges were so lucrative to one midsize institution that its chief executive once named his boat after them.

But the tide may be changing: An increasing number of banks are introducing services including grace periods and small short-term loans that provide less-punitive alternatives – if users qualify. Generally that means having a consistent deposit history, like regular paychecks, or other qualifications that may include a longstanding account.

The biggest shift occurred this month when Ally Bank said it would eliminate its $25 overdraft fee altogether, giving customers six days to get in the black again before it potentially limits how they use their accounts.

A number of other banks are taking smaller but still notable steps.

5) Speaking of scams, I’d never heard of PACE financing until watching this segment about it on Last Week Tonight with John Oliver. Here’s the one-sentence description from Wikipedia:

While the program might sound great, Oliver makes a compelling case for why it’s “fundamentally flawed and can put people at risk of losing their homes.”