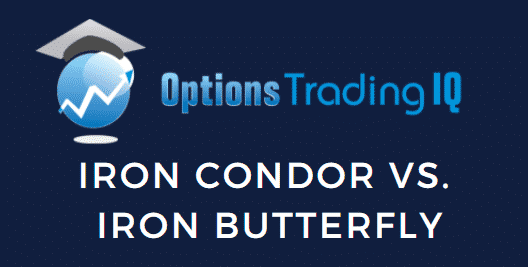 Let’s take a look at the Iron Condor vs Iron Butterfly and decide which is better.

Sometimes it is difficult to find the right option structure to express the view you have.

With so many different combinations and fancy names it can be challenging.

Both express a short volatility view yet there are some small nuances that separate them.

In this article we will explore their commonalities and differences.

Then we will practice evaluating which one is best.

A Short Iron Condor is created by selling an out of the money (OTM) strangle and then buying a further OTM strangle (wings) as downside protection. 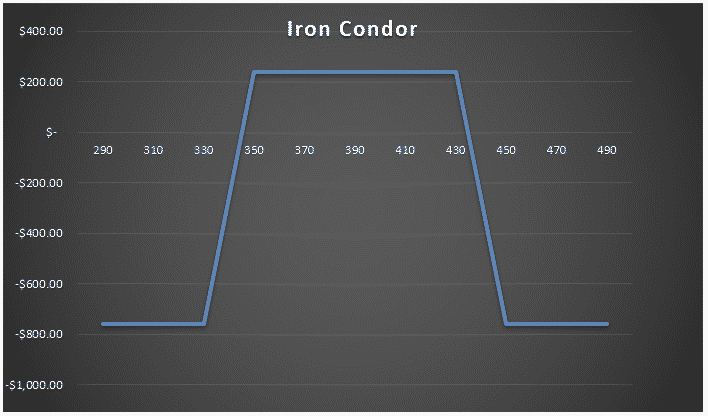 In contrast, an Iron Butterfly is created by selling an At the Money (ATM) straddle then buying a further OTM strangle, shown below. 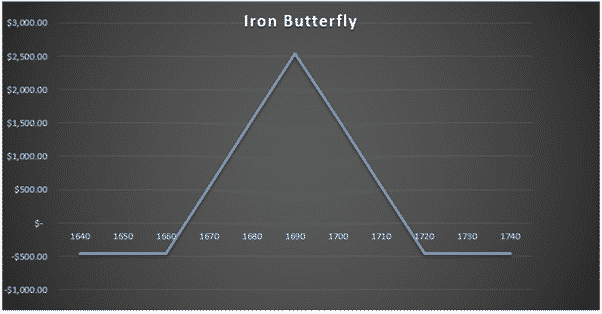 Looking at these structures visually they are quite similar. The structures express an almost identical view.

By placing this trade, we are conveying that we expect that the implied volatility on the underlying is overpriced.

Simply put we think the stock will move less than the market expects.

To protect ourselves if we are wrong, we also have our losses capped.

This is from our long wings on either side of the position.

Our exposure to the greeks are as follows for both structures on inception:

Before this article delves into the differences and when to place one trade structure over another it is important to stress that this is your view.

Imagine you are in a Turkish rug marker. It’s beneficial knowing the nuisance of the fabrics and haggling to get the best price.

Yet, doing so when you don’t even want a rug is detrimental.

You may end up carrying a rug you didn’t want in the first place.

The same goes for options. If we don’t want to express the view on volatility above, then we simply don’t make the trade.

The first thing we notice visually is that the Iron Condor has a wider profit zone than the Iron Butterfly.

We have a much greater range in price to receive a full profit of our credit on expiration.

In contrast, the Iron Butterfly has a higher credit initially and thus maximum profit.

If the stock stays completely unchanged the Iron Butterfly will make more than the Iron Condor.

Yet achieving that maximum profit would literally involve the stock pinning to the straddle price, very unlikely.

Neither of these is inherently better than the other.

The expected value is the same.

As the Iron Butterfly sells options at the money it will have a higher Vega exposure than the Iron Condor, on inception.

This means that for every point change in implied volatility the Iron Butterfly will make or lose more money.

This is because changes in vega affect ATM options the most.

At inception, this allows us to be more sensitive to the short vega we want. Conversely, we could sell more Iron Condors to get the same vega exposure.

The disadvantage of this is simple.

With an underlying under $20 an Iron Condor is simply costing too much.

When you pay out a big chunk of your credit in commissions and slippages that eats directly into your edge.

If you are getting a credit of 20 cents to put on the trade you probably need to avoid trading the underlying or switch to a straight short straddle.

*To note: As the underlying price moves vega changes.

For example, if the price moves outside our wings, we can actually become long vega.

Sometimes liquidity can be better for either the ATM or slightly OTM strikes.

Popular round number strikes (ex. 100) will have greater liquidity and open interest than other numbers (ex. 99).

This is not a major issue for the most popular stocks but for smaller illiquid options chains it can pose a problem.

Oftentimes even if you think liquidity is there when you enter a trade, it promptly seems to disappear when you need to exit.

By choosing strikes with the higher volume you can help leave avoid being at the mercy of a market maker and get a fairer fill.

While generally speaking we want to trade directionless sometimes it is difficult to trade without direction.

This is especially true when we trade an Iron Butterfly.

If the underlying is trading somewhere in the middle of different strikes, we are stuck choosing one and taking on delta on inception.

This is especially relevant when trading shorter duration as the delta we have at inception can be significant.

If we want this directional view, then it’s a perfect trade.

If not, then it’s better to work your Iron Condor body so you can get it as close to delta-neutral as possible.

I have taken a screenshot of the weekly options for Ford stock.

Should we pick an Iron Condor (in yellow) or an Iron Butterfly (in green) here?

The answer is clearly the Iron Butterfly.

If we select the Iron Condor, we are only getting 35 cents credit minus the cost of our wings. Yikes!

If you were thinking neither you are also right.

A Short Straddle would be a lot better than an Iron Fly due to the low price of the underlying and the short days to expiration.

The contracts are trading at a few pennies (shown in red).

Hence the short straddle minimizes transaction costs while maximizing the credit we keep for ourselves.

Let’s look at another example. I pulled up Tesla options.

Should we place an Iron Condor or an Iron Butterfly here?

If we want to do Iron Butterfly right off the bat, we will need to choose either the 695 or 690 strike.

The 695 strike is closer to ATM so if we are prepared to lean a couple of deltas bullish, we could go with the Iron Butterfly with the body at 695.

The spreads are very tight on the call side but less so on the put side.

Although we do have some decent open interest on the put side.

Alternatively, we could do an Iron Condor with a body of 690/695 which is also very close to delta neutral. We could also pick the strikes of 685/700.

Here we have an example of 3 potential choices.

Neither is right or wrong.

In many cases we will be choosing between apples vs other apples. In this example I would say it’s up to your preference whether to do an Iron Condor or an Iron Butterfly.

Choosing the right options structure can be challenging.

Both are risk defined trades which are short volatility.

Making the choice between the two can often come down to the price of the underlying and strikes available.

On larger liquid stocks, the ultimate decision can often come down to personal preference or any directional view.

Are you more inclined to take a higher odds of profit trade or a higher risk to reward trade?

Ultimately, when executed correctly either trade can be profitable if realized volatility is less than what the market implies.

Disclaimer: The information above is for educational purposes only and should not be treated as investment advice. The strategy presented would not be suitable for investors who are not familiar with exchange traded options. Any readers interested in this strategy should do their own research and seek advice from a licensed financial adviser.