The Season of Enchantment began Monday, April 20, 2020 and ended on the Sunday, June 21, 2020, lasting 62 days. It was the fifth Seasonal event in Sky since the game’s global release, and the first Season available following Sky’s launch for Android.

This first-of-its-kind Season introduced a more interactive and narrative-based format for Seasonal events as well as a new area to explore in Golden Wasteland called Forgotten Ark. It was here where all the Season’s Spirits could be found, and where the Season’s magical story slowly unfolded.

Welcome to the Season of Enchantment.

Our newest Season follows the story of a group of mysterious Spirits helpless in a desolate land, who have crashed in Golden Wasteland and need your help. Which Spirit will you befriend first?

A new area called Forgotten Ark was added in Golden Wasteland during the Season of Enchantment in April 2020. When you enter the first area, after youve plunged to the ground, explore the right-hand side of the map--the opposite side from where the Faint Spirit resides. There you will find a pier and a boat. Sit and meditate on the boat, and it will take you to the new area.

Besides the Ark, which is the first thing you see in this new area, there is a maze-like cave structure off to the right, and another cave structure straight ahead beyond the Ark. Both are filled with Dark Creatures (Crabs). Other smaller artefacts can also be found. Previously, the player could also collect candles from four hidden mushrooms, though these were removed in the 0.9.2 patch.

Two new Winged Light can be found in Forgotten Ark. One is easily found on the bow of the Ark. The other is inside a cave structure beyond it.

A new Spirit appears in Forgotten Ark. This is where it appears the new Season begins.

A new addition to this Season is that the Adventure Pass is available as a pre-order, and includes 10 additional Seasonal Candles if you purchase the pre-order.

About the Adventure Pass

About the Adventure Pass

This Season is also introducing a new format for finding the Spirits and for Quests.

Each day the Quest-Giver stands next to a Realms Portal, indicating where the days Seasonal Candle bunches are found. The chosen Realm will contain four sets/bunches of Seasonal Candles which together perfectly add up to one whole Seasonal Candle. Unlike previous Seasons, the Colored Lights decide the locations rather than the Spirits (as they are all found in the Forgotten Ark). Candle bunch locations:

In Forgotten Ark, the Enchantment Guide will give you a series of Quests to find a colored light for a particular Spirit. This is a separate Quest from the Daily Quests given in Home. These Light Quests appear throughout the first eight weeks of the Season. Return to the Forgotten Ark each week to see which Colored Light the Spirit is asking for. Find it in the Realms, then return to Forgotten Ark to return it to the Spirit, and see what happens.

Found in the Valley of Triumph Ice Rink. It goes under the ice, so it may be hidden from immediate view

Found in the Birds Nest area of Daylight Prairie. When you first enter the area, the Green Light will be high above you, carried by the group of Mantas. Eventually it will drop down toward one of the islands, where it will land

Found in Vault of Knowledge inside the Archives: the new area added with Season of Belonging that is beyond the two-person door on the bottom floor

Found in the final area of Hidden Forest, before you enter the Temple. It is not directly in the Broken Bridge area, but in the area just before that, near the treehouse that has a constellation gate around it. At first this Light, too, is high above, but eventually comes down so that it is easier to catch

New find-the-light Quests are made available across the Seasons duration. Retrieving these Colored Lights for the Quest-Giver Spirit at the Forgotten Ark unlocks a special cutscene for each Light returned. Each returned Light will be used to magically enhance or revitalize the area in some way; the background music also changes alongside. This is all part of an unfolding story of transformation throughout the Season.

‘A group of Spirits started their voyage towards prosperity. Take the boat and set sail. Follow their path, a new land awaits…’

A boat arrives at the pier in Golden Wasteland. Players are invited to climb aboard and sail to a new area called Forgotten Ark. After docking, players pass over the top of a hill and gaze down upon a vast and desolate landscape, a crashed ark rests in the center of the area. It seems the Spirits who had set out on a voyage did not quite make it; we must help them. One by one, players befriend each Spirit and live their memories. Players are told that the Spirits long for Red Light, and that it is found ‘where darkness prevails’. Upon returning the Light, the Nodding Muralist uses it to illuminate the murals they painted on the ark.

Players are told that the Spirits now seek Blue Light, and that ‘rumours point toward the pure waters of a mountain lake’. Upon returning the Light, the Indifferent Alchemist uses it to purify the sky and the pond water, turning both blue, also summoning the same koi fish we have seen in the little pond at Home and the pool outside the temple in Daylight Prairie.

Players are told that the Spirits now yearn for Cyan Light, and that it ‘lingers among the early gusts of wind’. Upon returning the Light, the Crab Walk Spirit uses it to create an updraft which forms holes in the clouds above, allowing sunlight to pour through. It also raises half of the Ark’s oars out of the sand, causing them to turn and row gently in the wind.

Players are told that the Spirits now need Green Light, and that ‘the fable is they are gifts to the earth from the sky’. Upon returning the Light, the Scare Spirit uses it to fertilize the land around the pond, causing patches of vibrant flowers and grass to bloom out of the gray sand.

Players are told that the Spirits now pray for Purple Light, and that ‘it is said they hoard ancient secrets’. Upon returning the Light, the Doze Spirit uses it to decorate the Ark in colorful tassel-adorned tents, draped tapestries, hanging lamps and drifting bunting lines. Day turns into night; a crescent moon now glistens through one of the holes in the clouds, drenching the area in an enchanting moonlit glow.

Players are told that the Spirits now cry for Orange Light, and that ‘they offer warmth in times of cold’. After returning the Light, the Play Fight Spirit sends it blazing through the area, calling together all the Spirits of the Forgotten Ark. The gathered Spirits all look upon you the player, each nodding in farewell and gratitude for your help. They then collectively ascend to the sky and depart. Left behind is the cargo of their voyage, their tools, wisdom, and treasures, that which we can use to forge our own spells. The lamps are lit; birds and butterflies now inhabit the once gloomy wreckage. Thanks to you, the ark no longer sits lost in darkness but is now filled with light and life.

Hopefully you enjoyed participating in the Season of Enchantment. The Forgotten Ark and its story will remain available to experience even after the Season concludes. You can purchase Daily Spells with in-game Currency at the Arks Spell Shop once youve completed its restoration. The Seasonal Spirits and their Cosmetics will be inaccessible after the Season ends on the 21st of June, though they will return in the future as Traveling Spirits.

All of the Spirits for the Season of Enchantment are found in the Forgotten Ark area of Wasteland. There are five new Expressions and one upgrade to the new Play Fight friend action.

This spirit offers a hairstyle and a mask. This spirit is found at the bow of the ark at the top left. 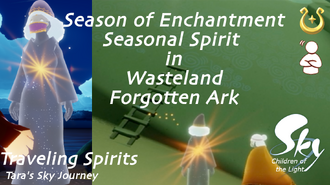 This spirit offers a hairstyle, mask, and a cape. This spirit is found at the right top of the caves straight ahead of the ark. 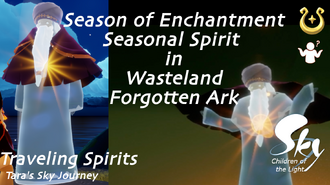 This spirit offers a hairstyle and a cape. This spirit is found at the entrance of the caves at the right of the ark. 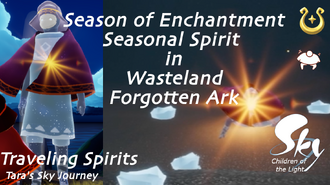 This spirit offers a hairstyle and a mask. This spirit is found at the cave structure straight ahead of the ark at the front. 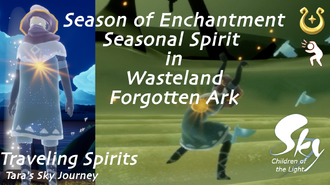 This spirit offers a hairstyle and cape. This spirit is found at the left side of the ark at the front. 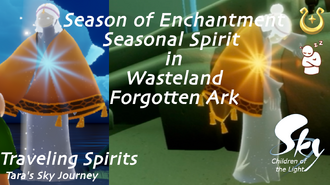 This spirit offers a hairstyle, mask, and a cape. This spirit is found at the bottom of the ruins at the left of the ark. 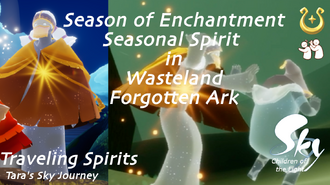 The two ultimate gifts for this season were the Enchantment turban hairstyle and tassels head accessory.